What is changing in everyday life with the 802.11ax Wi-Fi standard? After all, the speed does not increase 10x higher. It is much more important to use the radio spectrum (air) much more efficiently. The Wi-Fi standard was originally created in 1997 when few believed in the survival of the technology, but some features such as CSMA/CA algorithms, or channel idle control, have their roots in this decade-long history.

2. IoT and small device battery life (devices can be put to sleep), this allows 2-5 years of battery life.

3. Latency (OFDMA), or ping times, no longer fluctuate as apps and TCP connections do not hang.

4. Coexistence of networks and base stations (BSS coloring)

The most important change is OFDMA (Orthogonal Frequency Division Multiple Access), a well-known method of LTE technology that allows Wi-Fi users to better share a channel. For example, a 20 MHz channel can be shared between nine clients and the required number of subchannels allocated to each client. With such a system, 9 groups can communicate with the AP simultaneously. This relationship is two-way, so other customers don't have to wait for one customer to communicate. In essence, there are 9 base stations in the air!

In real life, there are situations where 90% of users use the Internet only for surfing and 10% are heavy users. In this case, the result is several times less latency as well as better permeability, because short acknowledgment packets do not need to occupy all the air.

The following picture shows clearly how the vertical time axis has white portions between packets, and it takes significantly more time to send each packet, because it takes longer timeframes for small receipts to wait for a packet to arrive than for the packet itself.

Bi-directional MU-MIMO? At the moment, MU-MIMO has only worked on the downlink side and has not yet found much support from users. The 11ax standard also allows MIMO parallel channels to be used for uploading.

Until now, MIMO has been used mainly to increase speed, simply mixing more bits on multiple spatial channels, usually 2x2 MIMO, because most terminals today are ready for this.

In the case of MU-MIMO, which is particularly effective for statically stationary devices (desktops, TVs, etc. in the office), customers are divided between different spatial MIMO channels.

So again, there are several simultaneous Wi-Fi APs in the air, and all customers can communicate with their AP independently.

BSS color, why is it still needed? If the two base stations, whether neighbors' or yours, hear each other, then by current standards they are obliged to be polite to each other, so if someone is sending in the air, you have to wait until silence arrives. The current solution often silences all equipment in a large house with several tenants, because during peak hours something happens in the air all the time. However, color (BSS COLORING) allows you to differentiate your network from that of your neighbor and ignore this CSMA/CA test to a certain extent that does not interfere with each other.
Examples:

A simple example is a high-load network where 100 client devices communicate at a time, in the current 11ac standards, each hundred clients must communicate separately, and in addition, each client must be able to communicate with the AP at any given time. Thus, with a large number of customers and workload, such activities are becoming increasingly difficult. In the case of OFDMA, the speeds of some clients decrease because they receive fewer frequencies, but the connection latency and stable throughput are maintained. This whole process is dynamic, so speeds can be redistributed as needed. The sign, however, is that TCP / IP connections do not stop due to latency fluctuations. At the same time, the smart base station can deploy MU-MIMO and by dividing the customers into groups in the room, the maximum number of customers and speed is multiplied even more. We look forward to Ruckus' smart radio solution and its efficient collaboration and innovation with the new 11ax Wi-Fi standard. But it can also be difficult with ten high-speed customers. An example of 100 clients could be an IoT solution with hundreds of small autonomous sensors. The 11ax standard now also makes it possible to put devices to sleep and create autonomous devices that communicate with the Wi-Fi standard with a very long battery life. 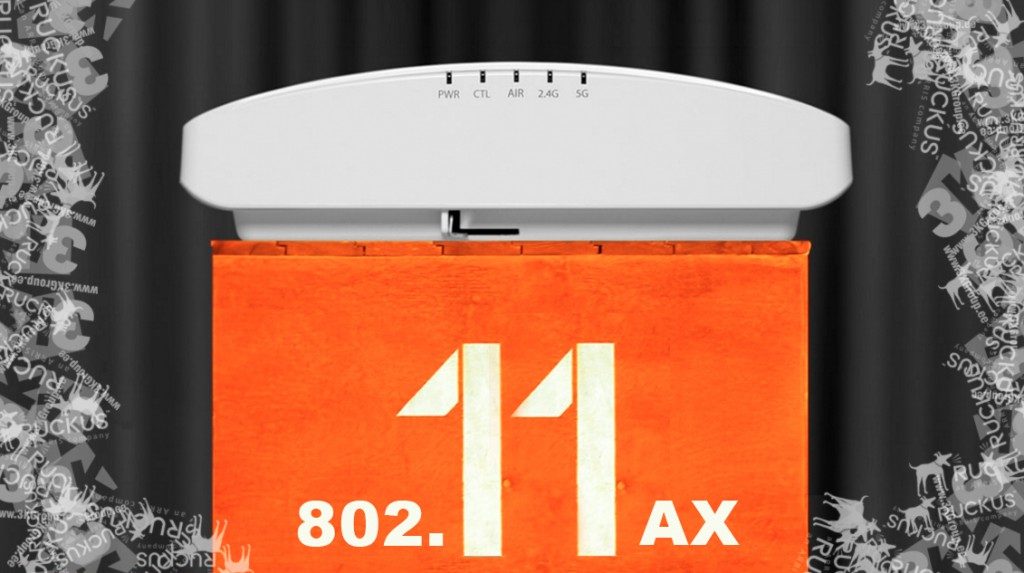